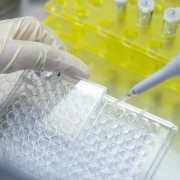 Discovering new drugs is hard. It’s not rocket science – in fact, it’s much harder than rocket science! When new rockets are designed, they generally work successfully almost all of the time. However, with new drug discovery projects, they fail most of the time, in fact >95% of the time. There’s a wide variety of reasons for this high failure rate, but they fall mainly into two areas:

The second route of failure has always frustrated me and I’ve spent much of my career trying new approaches to allow us to discover drugs that will have the right profile to be successful.

As part of this search, back in 2012, my team & I started working on a new drug discovery approach known as targeted protein degradation (TPD) which promised the chance for us to modify disease processes within cells in new ways, not previously possible. The approach was certainly unusual (my boss at the time said it was “crazy”) as it used drug molecules to effectively hijack the cellular machinery responsible for destroying unwanted proteins, modifying it to seek out and destroy specific proteins responsible for causing disease instead.

Although the idea was crazy, it worked, and today almost drug discovery companies are using this TPD approach in their drug discovery portfolios. In fact, at least three TPD molecules are now in clinical studies being given to patients to treat serious diseases such as metastatic, castration-resistant prostate cancer and estrogen receptor positive breast cancer. This speed of progress from discovery of TPD-mechanism-driven cellular effects through to initiation of clinical studies in around 6 years was rapid and we’re now all looking with huge interest to see how these early clinical TPD compounds will fare. Initial data on safety and efficacy are encouraging and we’ll learn much more about the clinical utility of this new TPD approach over the next year or two.

TPD strategies certainly have the potential to be transformational, opening up previously intractable biological pathways and drug profiles to find new ways to help patients but, as a relatively new drug discovery strategy, some of the potential limitations of TPD are only now starting to appear.

We know for example that most researchers in the TPD field use the same, narrow range of TPD mechanisms (based on the E3 ligases cereblon & VHL), and with this comes certain limitations. These mechanisms can’t efficiently degrade all the proteins we would like to and they also don’t work well across the full range of different, disease-relevant cells we need them to. Related to this, tumour cells have already shown an ability to develop resistance to existing TPD approaches using, not the usual resistance pathways seen with current drugs, but through new resistance routes removing or neutralising the degrading pathways used by the degraders. In addition, focusing on a small set of mechanisms means the molecules used often have a limited and partially fixed range of chemical properties which in turn makes it difficult to introduce desirable properties such as oral absorption or an ability to efficiently enter the brain & CNS.

Finding new ways to address these limitations will be vital to fully reap the benefits of TPD so I’m excited to have recently joined the team at Amphista, a new TPD company who is doing just that: building on all the advantages of TPD but also addressing the shortcomings. The Amphista team, through their pioneering work within the labs of TPD leader Alessio Ciulli, have discovered completely new ways of using TPD concepts to remove disease-causing proteins from within cells which don’t rely on the usual mechanisms used by everyone else and we’re now using these to develop our own portfolio of exciting drug discovery projects. We’re already making exciting progress – to learn more, drop by Amphista.com.

The rise and rise of TPD? Personal highlights from the 3rd Annual TPD Summit...
Scroll to top

Because these cookies are strictly necessary to deliver the website, refusing them will have impact how our site functions. You always can block or delete cookies by changing your browser settings and force blocking all cookies on this website. But this will always prompt you to accept/refuse cookies when revisiting our site.