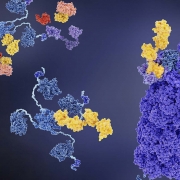 It promised to be the best TPD meeting of the year with everyone from across the rapidly expanding array of TPD companies converging on Boston to share their latest data. Well, the Boston part didn’t materialise for obvious global reasons but it was still a great meeting with several hundred leading TPD scientists from around the world sharing their data, strategy and thoughts on future directions for the field. Thanks to everyone at HansonWade for rounding up a great range of speakers and organising such a stimulating meeting.

There was so much exciting progress ranging from clinical data through to new mechanisms and concepts being disclosed for the first time. Keep reading to hear a few of the themes and personal highlights I took away from all the scientific sessions.

Everyone has very much woken up to the advantages of the protein repurposing potential of TPD approaches with a huge range of mechanisms now identified. After PROTACs (now also variously known as eg degronimids, degronimers, BiDaCs etc), we also now have TRAFTACs, LYTACs, MADTACs, AUTACs, CHAMPs & Amphistas – and, I’m sure, many more to come. Most of these mechanisms rely on ternary complexes (the mathematics used to model these is now thankfully better understood) but others use quaternary or even quinary complexes which may require some more complex mathematics to understand in detail!

These new approaches all offer strengths but also potential limitations. The lysosomally targeting LYTACs form Lycia offer impressive degradation of a range of extracellular & cell surface targets but leave intracellular target stores unaffected – which may be a good or bad thing. The Lycia team are also trying hard to establish a catalytic, endosomal-escape mechanism for their agents which currently aren’t efficiently recycled so can’t yet make full use of the potency boost afforded by catalytic action.

Recent TPD entrant Ranok showed for the first time some intriguing data on their chaperone-recruiting degraders known as CHAMPs. They recruit Hsp90 (and their associated E3 ligases!) and have potential for tumour-selective effects, of particular relevance given the current TPD focus in oncology. Kevin Foley, CSO at Ranok, shared some data on degradation of the BET family, a favourite sandbox for TPD approaches, and interestingly showed highly selective BRD4 degradation with no effect on BRD2 & 3 despite using BET-binding ligands which recruit all 3 targets.
The reasons for the high selectivity were unclear but didn’t prevent the BRD4-selective degrader from showing impressive in vivo efficacy. However, this unexpected high selectivity may have implications on the potential scope of targets which can be efficiently degraded using this approach – time will tell as we hear more.

Ranok also highlighted preliminary data showing KRAS degradation, as did Arvinas & Progenra (though data were limited and the projects still seem a way from IND entry yet). KRAS is certainly the TPD target de jour. Given the rapid pace of development of KRAS inhibitors, this is clearly a field which could deliver significant efficacy with each TPD agent now looking for its own advantage to showcase the benefits of TPD.

Jay Bradner, a TPD pioneer now at the helm of Novartis’ R&D with their incredibly diverse TPD strategy and network of collaborators, also gave an insightful overview based on years of learnings within Novartis. Jay showed some lovely new data including a novel observation that VHL binders can act as molecular glues in the same way as IMiDs or indisulam. Maybe many more protein binders can form neomorphic surfaces – it’s just that we never looked for them up till now? Despite the huge progress, he sounded some cautionary notes that many challenges remain. For example, rapid development of potent, in vivo active degraders is still not routine.

Jay riffed: “getting a good degrader needs a bit of luck and a lot of chemistry… despite what people might tell you!” and went on to highlight there are “many learnings, few rules”.

Resistance, such a problematic issue with many current anti-tumour agents, is also now being better understood in the TPD arena (Yu Shen from Abbvie gave a good overview of their recent publication). As degraders typically use a specific set of proteins to mediate their degradation (eg CRBN, Cul4, DDB1, E2 ligases etc), tumour cells have many more opportunities to mutate or downregulate one of these to overcome the degradation, an effect now being seen in multiple pre-clinical studies.

This gives such concern that Novartis now only consider TPD approaches for use in combination in the clinic. New mechanisms that lessen this resistance risk would clearly be valuable.

Continuing the theme that designing appropriate in vivo properties into bifunctional degraders is still not routine, Matthias Wittwer from the Roche DMPK team gave a great talk & discussion including a useful guide highlighting potential ways to generate more reliable in vitro data (add serum proteins to overcome low solubility issues which can lead to artefactual data) and to introduce oral bioavailability (focus on keeping solubility good and remove metabolic soft spots from the linker, adding rigidity to improve permeability if needed – also think carefully with VHL PROTACs as these are difficult to optimize for good oral profiles).

There was so much other good stuff as well I don’t have the space to summarise: benefits of reversible covalent degraders (Jin Wang & Nir London); PK-PD considerations (Kymera & others); ultra-high potency trivalent PROTACs (Alesiso Ciulli & Danette Daniels); STAT3 PROTACs ablating tumours (Shaomeng Wang); targeting transcription factors with TRAFTACs (Craig Crews). Oh, and I also spoke for the first time on data from the exciting new Amphista TPD mechanisms which we think can help address a few of the potential limitations highlighted above!

A great meeting – hopefully we can get back face to face for the next one!

Because these cookies are strictly necessary to deliver the website, refusing them will have impact how our site functions. You always can block or delete cookies by changing your browser settings and force blocking all cookies on this website. But this will always prompt you to accept/refuse cookies when revisiting our site.